In the books, Reacher is a former Major in the United States Army Military Police Corps, who travels through the United States on a raw and elemental quest to basically see more of his home country. But things don't go to plan as he's sucked into a myriad of tough situations, filled with complications, mysteries and people in dire need of help.

Here are all the books in Lee Child's Jack Reacher series listed in order of their publication date. Start reading them today.

Or check out my Joe Beck books to meet another outlaw ex-cop on the block. A private eye who's big, bad and as hard as they come. 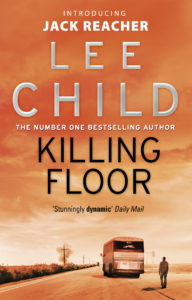 Jack Reacher jumps off a bus and walks fourteen miles down a country road into Margrave, Georgia. An arbitrary decision he’s about to regret.

Reacher is the only stranger in town on the day they have had their first homicide in thirty years.The cops arrest Reacher and the police chief turns eyewitness to place him at the scene. As nasty secrets leak out, and the body count mounts, one thing is for sure: they picked the wrong guy to take the fall. 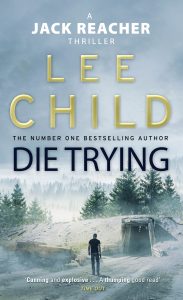 Jack Reacher, alone, strolling nowhere. A Chicago street in bright sunshine. A young woman, struggling on crutches. He offers her a steadying arm. And turns to see a handgun aimed at his stomach.

Chained in a dark van racing across America, Reacher doesn’t know why they’ve been kidnapped. The woman claims to be FBI. She’s certainly tough enough. But at their remote destination, will raw courage be enough to overcome the hopeless odds? 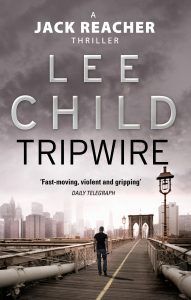 For Jack Reacher being invisible has become a habit. He spends his days digging swimming pools by hand and his nights as the bouncer in the local strip club in the Florida Keys. He doesn’t want to be found.

But someone has sent a private detective to seek him out. Then Reacher finds the guy beaten to death with his fingertips sliced off. It’s time to head north and work out who is trying to find him and why. 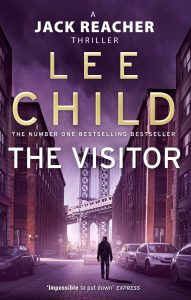 Sergeant Amy Callan and Lieutenant Caroline Cooke have a lot in common. Both were army high-flyers. Both were acquainted with Jack Reacher. Both were forced to resign from the service. Now they’re both dead.

Found in their own homes, naked, in a bath full of paint. Apparent victims of an army man. A loner, a smart guy with a score to settle, a ruthless vigilante. A man just like Jack Reacher. 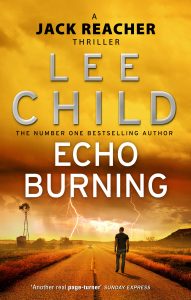 Jack Reacher, adrift in the hellish heat of a Texas summer. Looking for a lift through the vast empty landscape. A woman stops, and offers a ride. She is young, rich and beautiful. But her husband’s in jail. When he comes out, he’s going to kill her.

Her family’s hostile, she can’t trust the cops, and the lawyers won’t help. She is entangled in a web of lies and prejudice, hatred and murder.

Jack Reacher never could resist a lady in distress. 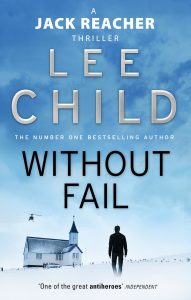 Jack Reacher walks alone. No job, no ID, no last known address. But he never turns down a plea for help.

Now a woman tracks him down. A woman serving at the very heart of US power. A woman who needs Reacher’s assistance in her new job – protecting the Vice-President of the United States, who someone wants dead. 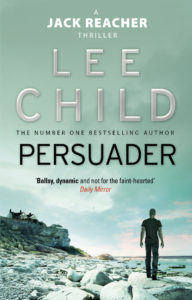 Jack Reacher lives for the moment. Without a home. Without commitment. But he has a burning desire to right wrongs – and rewrite his own agonizing past.

When Reacher witnesses a brutal kidnap attempt, he takes the law into his own hands. But a cop dies. Has Reacher lost his sense of right and wrong? 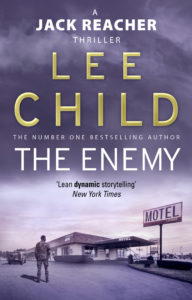 New Year’s Day, 1990. A soldier is found dead in a sleazy motel bed. Jack Reacher is the officer on duty. The soldier turns out to be a two-star general. The situation is bad enough, then Reacher finds the general’s wife.

This stomach-churning thriller turns back the clock to a younger Reacher, in dogtags. A Reacher who still believes in the service. A Reacher who imposes army discipline. Even if only in his own pragmatic way… 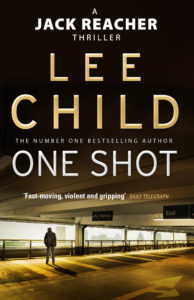 This is the novel the first Jack Reacher movie was based on so from a film perspective a valid place to start. A lone sniper shoots five people dead in a heartland city. But the accused guy says, ‘Get Reacher’. 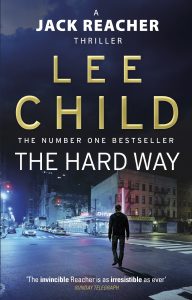 A coffee on a busy New York street leads to a shoot-out three thousand miles away in the Norfolk countryside. 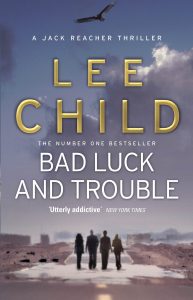 One of Reacher’s buddies has shown up dead in the California desert, and Reacher must put his old army unit back together. 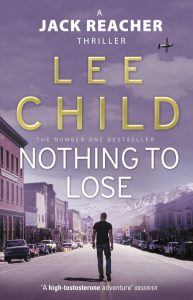 Reacher crosses the line between a town called Hope and one named Despair. 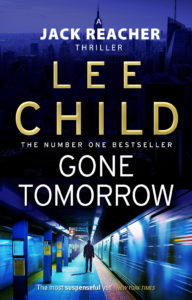 On the New York subway, Reacher counts down the twelve tell-tale signs of a suicide bomber. 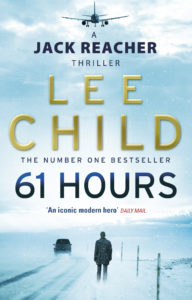 In freezing South Dakota, Reacher hitches a lift on a bus heading for trouble. 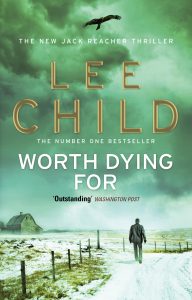 Reacher runs into a clan that’s terrifying the Nebraska locals, but it’s the unsolved case of a missing child that he can’t let go. 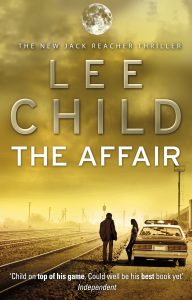 Six months before the events in Killing Floor, Major Jack Reacher of the US Military Police goes undercover in Mississippi, to investigate a murder. 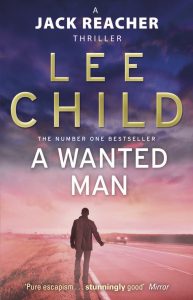 A freshly-busted nose makes it difficult for Reacher to hitch a ride. When at last he’s picked up by two men and a woman, it soon becomes clear they have something to hide… 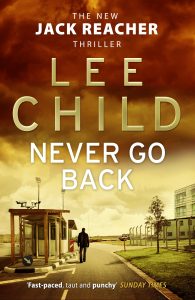 Reacher has finally made it to Virginia. But the woman he’s meeting isn’t where she’s supposed to be and before Reacher knows it, there’s a lot that’s not quite the way it’s supposed to be. This is the book the second Jack Reacher film is based on. 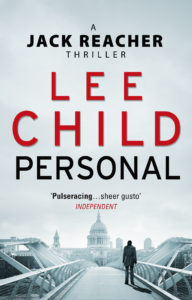 Someone has taken a long-range shot at the French president. Only one man could have done it. And Reacher is the one man who can find him. 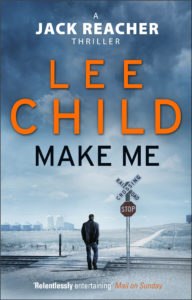 Reacher’s one-day stopover at Mother’s Rest turns into an open-ended quest leading to the most hidden reaches of the internet, and right into the nightmare heart of darkness. 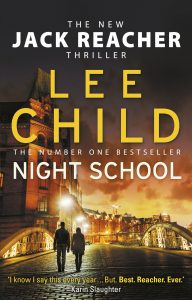 It’s just a voice plucked from the air: ‘The American wants a hundred million dollars’. For what? Who from? It’s 1996, and the Soviets are long gone. But now there’s a new enemy. In an apartment in Hamburg, a group of smartly-dressed young Saudis are planning something big.

Jack Reacher is fresh off a secret mission. The Army pats him on the back and sends him to a school with only three students: Reacher, an FBI agent, and a CIA analyst. Their assignment? To find that American. And what he’s selling. And to whom. There is serious shit going on, signs of a world gone mad. 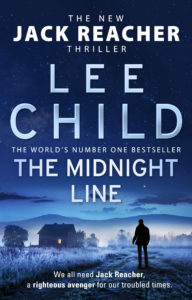 Reacher will stop at nothing until he’s tracked down the owner of a ring – a female cadet – and made sure she’s okay. This is a raw and elemental quest for simple justice. 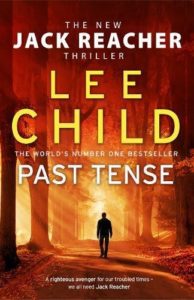 Reacher, the eternal drifter, happens by chance on the small New Hampshire town he remembers his father was supposed to have come from. But when he starts looking for his dad’s old home, he finds there’s no record of anyone named Reacher ever having lived there.

He's America's Unlicensed Private Detective, an outlaw who roams the length and breadth of America righting wrongs and reaping riches. Standing an imposing 6'5" and weighing 275 lbs, he's a force to be reckoned with. His office is his cell phone, the gun he carries is unregistered and his methods are outwith the law. 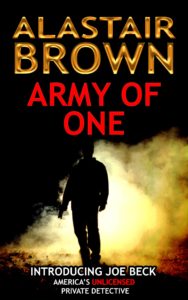 Army of One: Introducing Joe Beck

Joe Beck is in McAllen, Texas, for the funeral of an old friend who took his own life, but winds up being taken hostage at gun point, alongside a prostitute he only just met, by three men he's never seen before. Three men who know more about Joe Beck's dead friend than they ought to.

How will Joe Beck react? What do the men want with him? And what do they know about his friend?

Get the book
This site uses cookies: Find out more.